In the beginning, the emphasis was almost totally on transportation. The coming of the railroads stirred some of the town's more progressive citizens to action. Seeing the need for more adequate local transportation facilities, a group of men headed by General Anson Mills, who laid out El Paso's streets and designed the Mills Building, obtained a charter for the El Paso Street Railway Company and the privilege of operating a mule-drawn streetcar system. The system began service in 1882. It expanded, prospered, and routes diversified, but most of the traffic was between El Paso and Juárez.

The mule-car system was doubtlessly considered modern when established. However, as the community grew, it aspired to more modern conveniences. From the East came reports of electric lighting and streetcars that got their power from overhead electric trolley wires. Some El Pasoans believed that mule cars were too slow for an up-and-coming city. 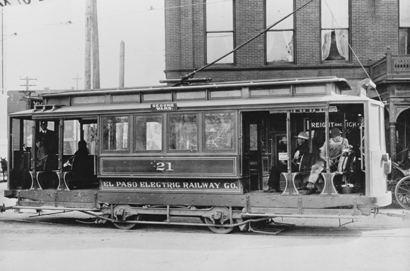 The move to electric cars took place in an elaborate international ceremony in which Mandy the mule was given a ride on a flat car over the new streetcar route between Juárez and El Paso. Mandy pulled one of the last remaining mule-drawn streetcars which was for many years displayed in Cleveland Square in downtown El Paso. Cleveland Square was located on the current site of the El Paso Museum of History and the re-modeled and expanded El Paso Library.

Electric streetcar routes branched out in all directions from downtown leading to Fort Bliss and Government Hill and to the Mesa Street route.

Also, in the same era, there were other developments in power and light. In 1883, an experiment in the use of batteries as a source of electrical current was unsuccessful commercially, and three years later a small direct generating plant was erected. This was enough to provide current for a few arc street lights and stores.

Then-Mayor Joseph Magoffin and the city council were petitioned by a group of citizens to organize a company under the name of Brush Electric Light Company of El Paso. The first electric light in use in El Paso was said to be Rothschild and Marcuse Jewelers downtown. 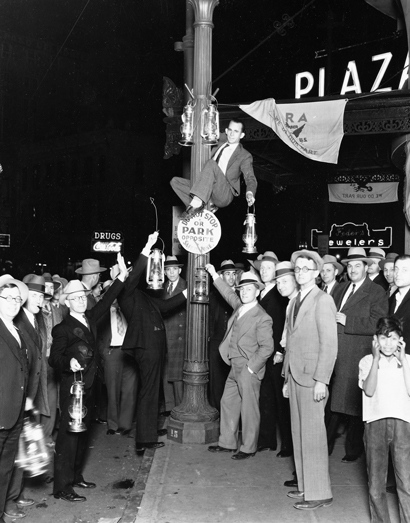 By 1890, Zach T. White, prominent El Paso pioneer, had assumed command of the electrical energy business and had new generating equipment installed at Third and Chihuahua Streets. The use of incandescent lamps began in El Paso stores and homes.

The state of Texas issued a charter to the International Light and Power Company in 1889 for the construction and operation of a generating plant to supply power, not only to the city of El Paso and neighboring communities on the northern side of the Rio Grande, but also to Juárez.

A management contract was negotiated with Stone and Webster Subsidiary Engineers Public Service Company in 1902 that brought El Paso Electric Railway Company its first engineering and financial assistance, an essential part of the utility's growth.

El Paso Electric Railway Company purchased International Light and Power Company in 1905 and the electric portion of El Paso Gas and Electric Company in 1914. As the electric systems grew, alternating current replaced direct current except for streetcars and some elevators.

Life for the Company's employees in those days was not without extraordinary excitement. T. Elmer Hearn was quoted in The El Paso Times of August 1951, as having vivid memories of repairing electric facilities in 1910 when bullets showered in El Paso during the Madera revolution in Mexico.

"Some of the men stood on top of the Santa Fe plant to watch the excitement, but the bullets began whistling by and they all ducked to safety," Hearn said. "One man was killed as he stood on a porch across from the plant on Santa Fe Street.

"We were called to Juárez to repair lines, and every now and then some ardent revolutionist would start firing his rifle in the air. We made pretty good targets on those poles," he said. 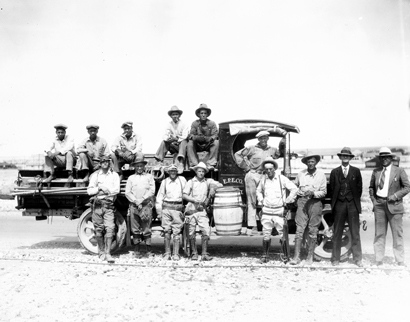 EPE's growth continued during World War I and the post-war era, and by 1923, generating capacity was up to 18,000 kilowatts while the number of meters had increased to 15,697.

The Rio Grande Power Plant was built in 1929 in what was then called El Paso's Upper Valley, now known as Sunland Park, N.M. High voltage lines from the plant were erected to serve Sierra Blanca and Van Horn, Texas, to the southeast which joined the system in 1927. Hatch and Rincon, N.M., were added to the system in 1928.

In 1940, El Paso Electric absorbed the Mesilla Valley Electric Company, which had been formed in 1924 in New Mexico to serve Las Cruces and surrounding communities. 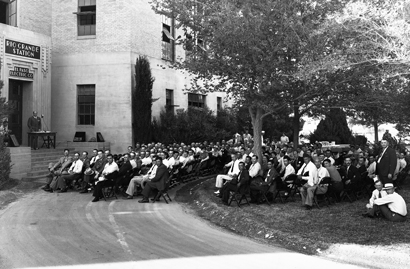 El Paso Electric's relationship with the Stone and Webster Subsidiary Engineers Public Service Company ended in July 1947, and since that time the Company has been an independent electric utility operating in West Texas and Southern New Mexico. 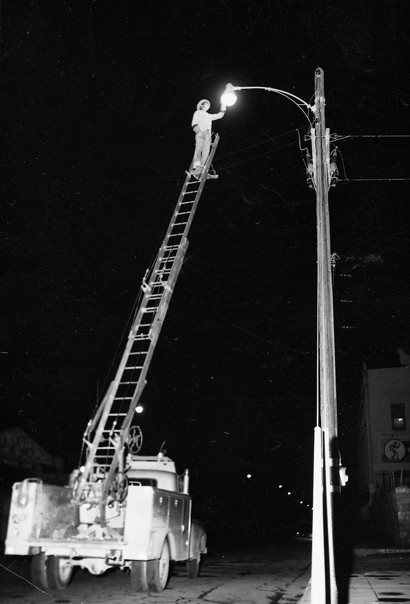 By 1950, EPE had developed kilowatt-hour sales of 347,550,340, but EPE's growth did not slow at that point. As the community continued to grow and prosper, EPE kept pace in providing additional capacity. EPE moved quickly ahead with 4,844 new customers connected to the system as growth continued. There was a total of 54,108 customers at the end of the year.

Also, in 1950, El Paso Electric purchased the Martin Building, a seven-story office building in downtown El Paso that had been EPE's operating headquarters since 1924.

Throughout EPE's history, a consistent growth factor has continued at an accelerated rate.

EPE’s electric power generation was at an all-time high in 1959 – for the first time exceeding one billion kilowatt-hours.

In 1960, Unit 1 at Newman Power Station had been completed. In the last quarter of that year, preliminary construction was started on Unit 2 with a capability of 90,000 kilowatts for service in 1963. Construction was started in the mid-1960s on still another generating unit at Newman Station, the 115,000-KW Unit No. 3, which went into operation in 1966. 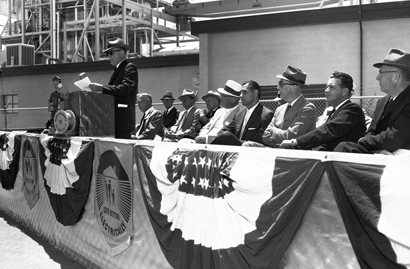 As energy needs increased, EPE purchased a seven percent undivided interest in two of the five units at Four Corners Generating Station, a coal-fired plant in Farmington, N.M., that was completed in 1969. In August of 2016, as the 50-year contract with Four Corners came to an end, EPE decided that it would not extend its contract, making EPE one of the only utilities in Texas and New Mexico to generate electricity completely coal-free.

The rapid growth of the New Mexico Division of EPE resulted in the construction of a new division office building in Las Cruces in 1967. 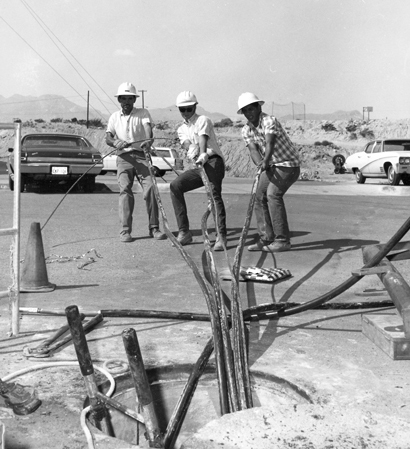 Continually planning for the future needs of a still-growing community, EPE began construction in 1970 on Unit No. 8 at the Rio Grande Station, a 165,000-kilowatt addition for operation in 1972.

The early '70s heralded the beginning of what has been known as the energy crisis and EPE immediately took measures to confront the problem in negotiating long-term fuel contracts, future fuel mix procedures and participation in research and development programs for alternate forms of energy production.

In 1973, EPE signed an agreement with several other utilities to participate in the Arizona Nuclear Power Project for energy beginning in 1983. The first rate increase in the EPE’s history was granted in December 1974, effective Jan. 1, 1975. A construction permit was granted by the U.S. Nuclear Regulatory Commission in May 1976. Construction on the first unit was started soon thereafter.

Also, in 1975, a fourth unit was built at Newman Power Station. This unit is a combined cycle plant, known as "Power at Combined Efficiency" or PACE, and consists of two combustion turbines and a steam turbine. The unit is more efficient because the exhaust heat from the combustion turbines is used to heat water in a boiler which provides steam to drive the turbine. 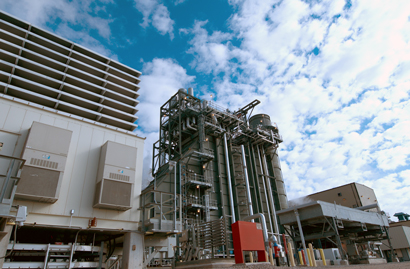 The nuclear plant, known as Palo Verde Nuclear Generating Station, has three units, which were completed and went online in February 1986, September 1986, and September 1988, for Units 1, 2 and 3, respectively. EPE has a 15.8 percent interest in the three 1,270-megawatt units. An achievement was reached in 1990 when Palo Verde produced more electricity than any other commercial nuclear plant in the country, and it cost less to build per kilowatt-hour than any other nuclear plant serving Texas. 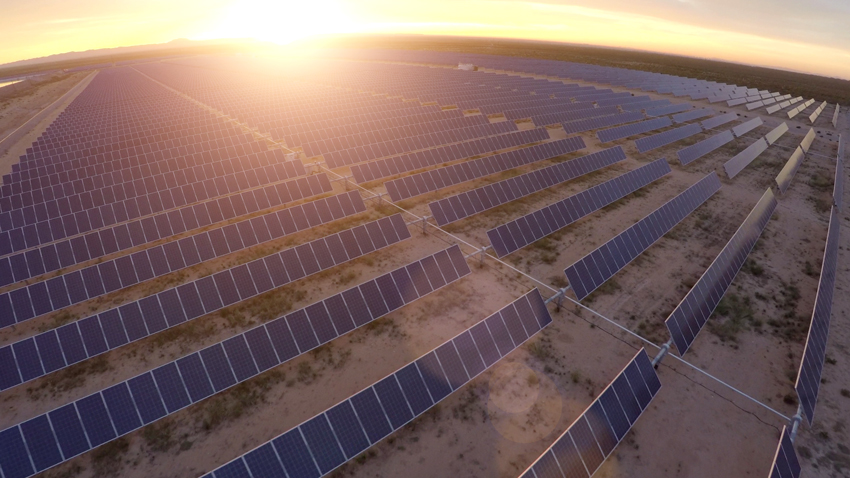 In 2006, EPE developed its first ever utility scale solar facility, and has expanded its use of renewable energy in the past few years. EPE now has 14 solar facilities of various sizes, including its 3-megawatt Texas Community Solar facility, which is home to the EPE Community Solar Program, in which customers can obtain a portion of their energy from the facility at a fixed price.

The last nine decades have brought much change and growth to a company that started out in the transportation business that served both El Paso and Juárez. In a sense, it has returned to serving both sides of the border as EPE signed an agreement with the Republic of Mexico to provide power to Mexico’s rapidly growing northern border area. Mexico has experienced exceptional growth in the demand for electricity, and EPE is strategically located to supply a portion of that demand.

Throughout EPE’s over 100 year history, one thing remains timeless, a dedication to providing safe, reliable, and cost-effective service. From the inception of El Paso Electric Railway Company through the decades of change, the employees have strived to provide the best customer service possible. Whether driving a team of mules in the early days, maintaining the power plant switchboard, climbing poles to restore electric service, designing new substations, or fulfilling administrative duties, El Paso Electric employees continue their focus on serving customers, and making our region a great place to live and work.