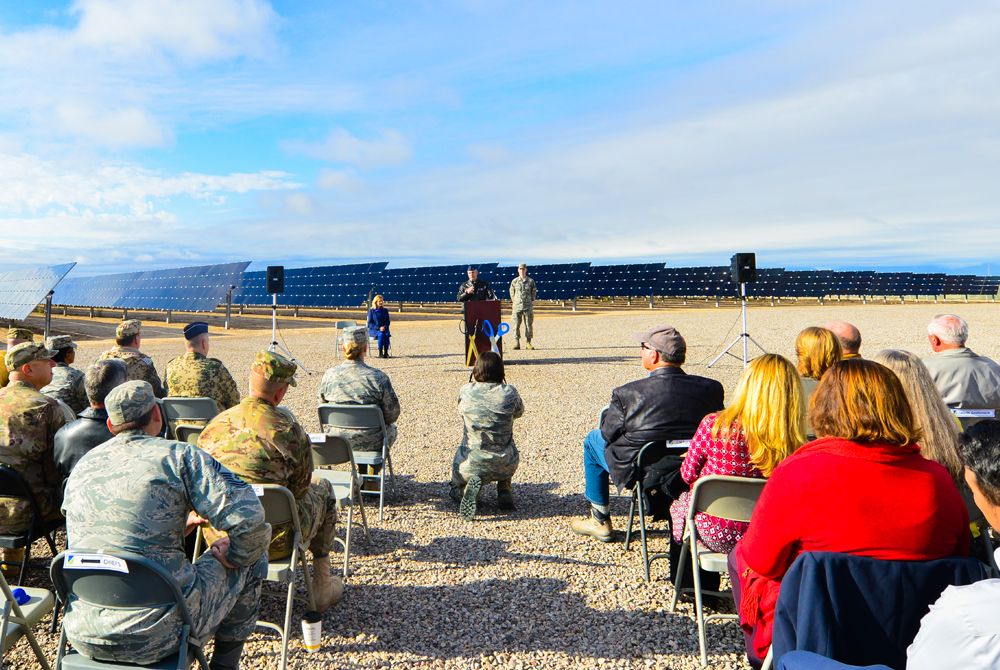 “The completion of the Holloman Atlas Solar Array marks a milestone in our renewable energy goals and embodies our mission to provide safe, clean, and sustainable sources of energy,” said Mary Kipp, El Paso Electric President and CEO. “Today, we want to celebrate our inaugural collaboration with the U.S. Air Force and look forward to continue serving our community through these kinds of partnerships.”

"From the beginning, we were confident in this new cooperation with El Paso Electric as we all came together to bring this project to fruition. The addition of this clean energy resource will enhance our resiliency and ability to better equip our installation while at the same time saving on tax payer costs. In addition to enhancing our installation, we are reducing our dependence on fossil fuels. By decreasing this dependence, we are strengthening and increasing our national security." said Lt. Col. Joel Purcell, 49th Wing Civil Engineer Squadron, Commander.

EPE’s newest solar facility is made up of almost 56,000 thin-film modules that will generate enough electricity to power more than 1,700 homes annually. This will prevent annual CO2 emissions by over 9,000 U.S. tons, the equivalent of removing 2,000 cars from the road, and will also save approximately nine million gallons of water.

“The Holloman Atlas Solar Array is a landmark project for us as we were once again able to work with EPE to build its first facility to serve a military installation, as well as expand its clean energy footprint for the region,” said Jim Brown, Exyte Energy, Inc. President.

The addition of the Holloman Atlas Solar Array will increase EPE’s total renewable energy portfolio to a total of 115 MWs.

About Holloman Air Force Base

Exyte is a global leader in design, engineering and construction delivering high-tech facilities, plants and factories. With a history of more than 100 years, Exyte serves the most technically demanding clients in growth markets such as semiconductors, life sciences, energy, and data centers across the full spectrum of services from consulting and design to managing turnkey solutions. Operating in more than 20 countries, Exyte is uniquely positioned to support clients locally and globally. In 2017, Exyte generated sales of 2.4 billion euros, up from 2.1 billion euros in 2016 on a like-for-like basis, with over 4,800 highly experienced and motivated employees. For more information, please visit: www.exyte.net.